Outremer 4X is the performance version of the Outremer 45. 4X is more elongated than its predecessor and also offers increased speed. However, it is not a racing catamaran. Rather, the idea behind it is that of a fast multihull boat worthy of being taken on long voyages by a small family.

As always, the focus of the Outremer 4X catamaran is seaworthiness, comfort, and safety. Outremer achieves its idea of comfort not by extravagant living spaces but by specific designing details that make the catamaran a nimble delight on the sea. The hulls of the Outremer 4X have been elongated by 3 ft. to give it more structural stability. The Outremer 4X catamaran has all structural parts laminated, a vacuum-infused carbon composite reinforced bulkheads. It also has a carbon rotating mast, daggerboards, and numerous other carbon reinforcements that help in reducing the weight of the vessel, making it less prone to pitching and easier to maneuver.

The length of the Outremer 4X has a larger transom platforms that provides a large area to make it easy to access the cockpit or go down into the water. It also hosts storage space to the sides. The side decks are wide, and there is protection available while moving across in the form of carbon hand-rails.

Like the cockpit of Outremer 45, 4X also boasts an asymmetrical cockpit, which is at the same level as the saloon. The cockpit is protected from the weather by a strip of rigid hard-top bimini, which can be extended using the removable side panels. There is a built-in table with a neat wood finishing and a seating area that can comfortably house up to 8 people.

Three steps above the cockpit are the raised helm station of the catamaran, equipped with a comfortable helm seat and steering wheel both to port and to starboard. The winches and clutches used to work the sheets, halyards, and mast rotation are all located next to the wheel. All the control lines and halyards are, thus, accessible at the helm station. While the roof bulkhead protects the helm person, the helm station also provides an excellent view of all four corners of the vessel – making it easier to maneuver safely.

The foredeck of the Outremer 4X has a structural beam and structural compression beam in carbon as well. Like the other Outremer, 4X has no seating space forward and two large trampolines. The positioning of the life raft beside one of the trampolines is thoughtful and away from potential sources of danger such as the engine room or the galley where a fire can break out. The sail lockers are deep and wide enough to not only store all the sails and ropes but also other additional equipment such as kayaks, bikes, paddles, etc.

Open to the cockpit via sliding glass door, the saloon of Outremer offers a panoramic view of the world beyond the interiors. It offers an aft-facing settee wrapped around a telescopic table which can easily seat up to 6 people. The table can be converted into a berth with additional cushions to serve as either a watch berth or an additional berth for friends staying over.

The L-shaped galley is positioned right in between the cockpit and the saloon, making it open to both the areas for an efficient serving of meals and drinks. It has a single stainless steel sink and a three-burner hob which has a porthole for ventilation directly above it. The galley has sufficient storage space for the food supplies and also has a fitted oven and a refrigerator.

The navigation station faces forward and comes with a rotating bar seat which can be rolled around to the table. The desk at the navigation station is spacious, where all the electronics are installed. The station, of course, offers excellent visibility of the sails through the window.

The saloon is well ventilated and enjoys lots of light, which filters in. It also has multiple forward opening hatches and portholes.

In the owner’s version, the owner’s hull with a double bed in the cabin aft is well-ventilated and bright, featuring a large window, a hatch, and a porthole. The area forward is occupied by a head that is large enough to be comfortably functional. The two cabins in the port hull are similar but slightly smaller.

The accommodations offered in Outremer 4X are smaller than those you find on a charter catamaran, owing to the streamlined design to achieve better performance and greater speed.

Outremer 4X has an overall length of 14.6 meters and beam of 7.10 meters. It has a total displacement of 8.2/11.1 tons. Powered by two 30 hp diesel engines, Outremer 4X has a water capacity of 336 liters and fuel capacity of 440 liters. The fuel capacity is particularly beneficial because the vessel consumes only 3 liters for every 100 kilometers when cruising on one engine at 6 knots, translating to a fuel capacity enough to sustain 150 hours of motor cruising. The diesel and water tankers are located forward of the vessel with access behind the trampolines.

In conclusion, Outremer 4X retains all the best features of Outremer 45 but is further refined to deliver an intricate balance between style, speed, and safety. With a 15% more powerful sail plan, Outremer 4X is considered a supercharged version of its predecessors, and this winner of the 2016-17 European Yacht of the Year award certainly does offer improved performance. Outremer 4X is meant for families seeking fast yet comfortable sailing across the oceans. 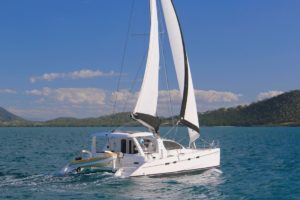 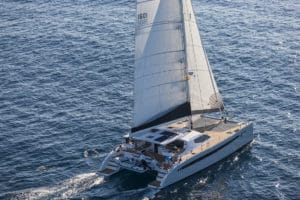 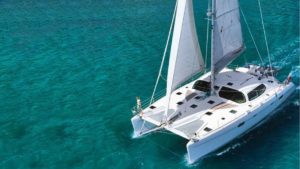